This week’s match report begins with gratitude to a great club man who has decided to take his next step and move on to pastures new. Rich Clare – 9 Seasons, 2258 Runs, 144 Wickets, 63 catches. ‘Flix is a surface I have always loved, The Hirsch is a ground I have always loved’ – A quote from Rich Clare (originally by Steffi Graf and doctored for MCC) The weekend began with a Friday night curry which was enjoyed by over 30 members of MCC who turned up to wave off Rich Clare in what was a lovely evening (including a one day break) to celebrate the final weekend of cricket MCC will see this year.

Beers were had, curries were eaten and Dark and Stormies were consumed. After the hangover and a further sleep we arrived at the MIC ground to witness them rolling out the pitch in the most peculiar fashion (basically it wasn’t straight). As to whether they felt this was advantageous to their style of cricket is still beyond the majority of us, although they claim its so that nobody will hit a 6 into the children’s playground over 300 yards away…

We were also greeted by the travelling family of Westy, whose parents came along to cheer us on! We were also graced by a special guest appearance of Igor Sestan who, although he clearly came for a beer and an afternoon of chatter in the sun, actually ended up standing in as square leg umpire for the entire game – many thanks Igor!! MIC’s Kashif won the toss and decided to bat first on what can only be described as a flat plastic pitch! The majority of the MIC team were familiar to us and so we knew what we had to do!

The game started punctually at 13.11 and began with a maiden over from Naveen! After 8 great opening overs from Naveen and the Great Dane, MIC looked to be struggling with the opening pair both out in the low 10’s and MCC were on top. A chance in the bowling then brought Nirmal and Carrie into the action and unfortunately they were bowling to what seemed to be a very in form Kashif who rather courteously decided to start hitting the ball over the trees at a comfortable rate.

The attack then was remastered by Captain Weston who brought off Nirmal after his first over and introduced Amith whose second over then involved a 4, a 5 and 6 (the 5 coming from the ball hitting the helmet after an out swinger baffled the batsmen and wicket keeper! Nirmal was then reintroduced from the pavilion with Dan Garner getting his fist over from the Kinderspielplatz End. Both of them bowled with good success, Garner with particularly good figures of 2-6 off two. The MIC innings finished with Kashif 64 no. and MCC being left to chase 167 at just over 8 an over.

MCC started brightly with Westy clipping a lovely 4 and Manny clearing the trees. Unfortunately we lost the vital wicket of Westy for 8 as he was bowled trying to hit the ball back to the Hirsch. Amith and Manny then settled the ship with some great shot play and managed a partnership of 60. Amith then hit the ball in the air attempting his favoured leg clip, bringing Chris Carrie to the wicket. 3 balls later Chris was on his way back to the pavilion having chipped the ball to the leg side after a rather sprightly run 2.

Then, in classic MCC fashion the wickets began falling. Darren, also in his last MCC game, was already half way down the wicket before being sent back and was run out for 1. Moments later, after a glorious outside edge from Tom M, Manny was the next to fall after a well struck 53 off 46 balls. Naveen fell quickly too after trying to fend away some chin music and gloving behind. The two Toms then seemed to be settling in and keeping up with the run rate before Tom M (cant remember how he got out) and was quickly followed to the ant infested changing steps by Shazhad, who continued his form of either hitting 20 quickly or getting out on his 3rd ball (in this case the latter). Up stepped Garner with 35 still needed to win and although his dancing antics were enough to gain a few extra partnership runs from the wides he then was bowled as he attempted his ‘run across all the stumps and swing’ shot. Nirmal then faced a ball before missing one to the keeper and deciding not to make up his ground and getting himself rather comically run out. MCC ended up losing by 16 runs in the last over but as their scorer remarked ‘we have a great bowling attack’ (enter quote about where we and they finished in the league).

All in all it was a rather nice day which ended up in Rosenpark Biergarten. I don’t have the scorebook so I can’t give exact scores. Phil 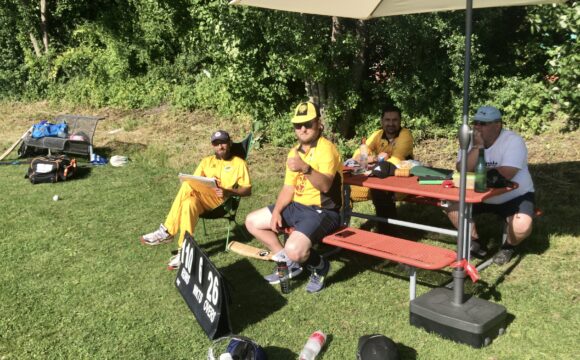 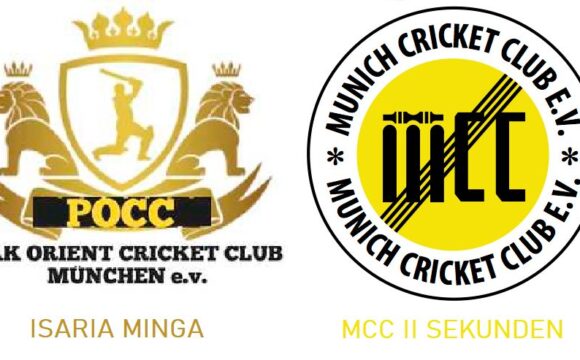