After the painful business of making the travel arrangements nine tourists gathered at the Hirschanger at 9am on Sunday morning, the other four meeting at various times at Freising railway station. The trip to Nuremberg was uneventful, little traffic with no queues and all, even the Freising contingent, arrived in time for the 12 noon start.

Captain Weston won the toss and chose to bat although their stand-in captain then argued the toss claiming the head on the coin was actually a tail. He was a stand-in captain because the real captain didn`t turn up until five overs had been bowled and, rather annoyingly, the umpire allowed a substitute fielder during this time. Such village behaviour is very annoying. Also that the home side did not have a scorer and offered no help in identifying their bowlers – as they only bowl from one end and all the scorer sees is the back of the bowler with no identifying numbers you can understand the difficulty.

The pitch has been modified since our visit last year and is not as scarily bouncy and fast but still fast enough .After ten overs, Weston and O’Meagher had put on a steady 34 with only one boundary four Unfortunately Weston went for 14 in the next over and was replaced by the cheer leader favourite Sarma. He appeared completely at ease at the wicket and put on 60 with O’Meagher for the second wicket before falling for 38 in the 20th over. Drinks were taken – the longest drinks break you will ever experience, the opposition began sampling the Eid barbecue – and Mitchell replaced Sarma to put on a useful partnership of 21until O’Meagher was bowled for 43 in the 24th, the highest score of the innings. In the next over Baker continued his torrid form in league matches and hit one straight to a sub fielder – this time genuine as a player suffered a severe pulled hammy. Ishtiak joined the duck race very quickly as did Clare who followed him. However as Ishy leaves this week and Clare in a couple of weeks, Sestan need have no fears of his position at the top of the pile. MCC had gone from 115 for 3 to 123 for 6 when Nielsen came in. His sojourn was also short but he did score 8 runs including an impressive boundary 6. Then Mitchell was guilty of terrible village, walking down the pitch for an easy one and being run out (sauntered out) by a direct throw from the keeper at the non-strikers end. Before that he and Konchada had rescued our total somewhat with a useful 36 partnership but it could have been that much better. MCC were now 8 down for 171 in the 37th over. Coulter came to join the duck race and Qureshi scored 1 not out, Konchada going for 15 in the 38th over.

Lunch was a splendid barbecue provided by the opposition consisting of grilled chicken, a tasty salad, curried lamb with rice and grilled kebabs. The last time I recall such a spread was back in the eighties when we toured Basel and the curry rice just about killed us for a long afternoon in the field then.

MCC opening bowlers Coulter and Clare spread wides and no-balls around very liberally – after four overs there were already ten extras. They tightened up somewhat and only gave two more wides in the next four overs. Thereafter Coulter was replaced by O’Meagher who kept up the good work bowling five wides and getting one wicket in his first over. Nuremberg were now 50 for 1 and far ahead of the required run rate. Coulter now continued and bowled a much better spell going for only 11 runs in four overs but still including 8 wides or no-balls. O’Meagher was replaced by Qureshi after his second wicket in his third over and his first over was a wicket maiden so Nuremberg were now 83 for 3 down in the 15th over. Thirty nine runs later the fourth wicket fell, caught Coulter, bowled Konchada and they were 122 for 4 in the 22nd. One run later it was 5 down, Nielsen getting the only LBW of the match. Seven runs later they were six, down Nassery going for 30 caught Mitchell bowled Nielsen, 18 of those runs coming after Qureshi dropped an absolute four seasons of a catch. He was, unfortunately, not alone, four catches in total were put down, one of them by a Ray Charles impresario wearing dark shades on an overcast day and not seeing the bl**#y ball. Still MCC plugged on and when keeper/captain Weston took his third catch the opposition were 137 for seven down in the 28th over and we had a chance. A twenty nine run partnership for the eighth wicket took them to 166 in the 33rd and needing only seven runs to win. Sarma came on for the unenviable task of bowling his first over and the winning runs came off a boundary four

Once again MCC lost a match we should have won, poor catching, village running between the wickets and a predilection for wides and no-balls all contributed to yet another defeat. A special mention for Phil Bowes who travelled there as 12th man and fielded the whole of the Nuremberg innings because of an injury to Darren Baker. To round off a disappointing day for some of us, captain Weston seemed to take great pleasure in broadcasting the result of the second test at Lords. 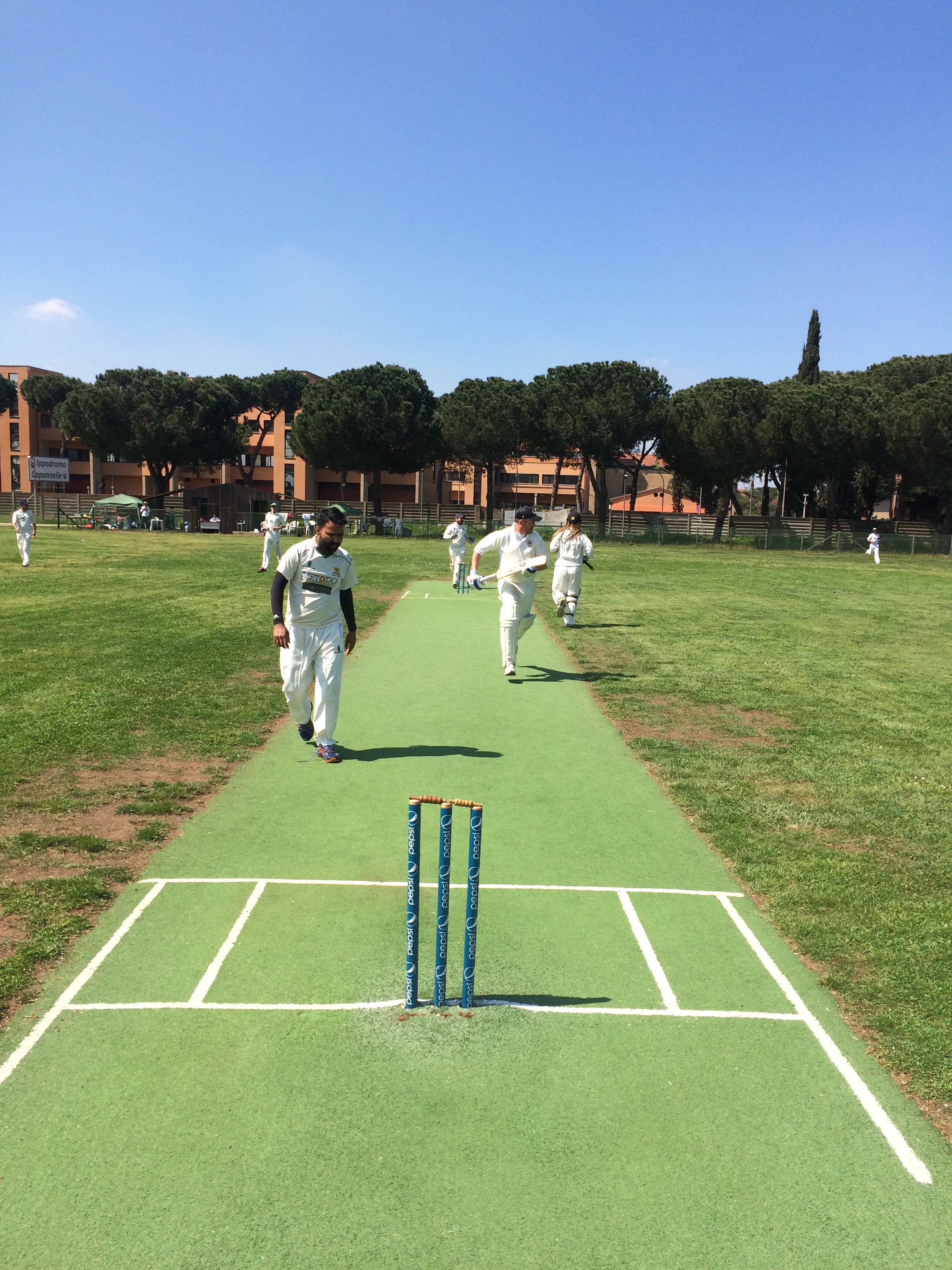