A glorious day at the Hirschanger, 25°C plus, sunny with scattered clouds, a cooling breeze and everyone keyed up for the social event of the season, a friendly against SSC where the arrangements were: SSC to provide the curry – chicken curry, Dal curry, curried potatoes and beans with Basmati rice – and MCC to provide the beer and whisky. Blades and Garner had cleaned the refrigerator on Friday evening and stocked up with four crates of Augustiner in good time to ensure it would be cool and fresh for the event.

Captain for the day Blades and Nelson went for the toss, Nelson winning for the SSC team which was a collection of SSC, MICs and Munich Boys (clearly the word of free beer and whisky had travelled) and chose to bat.

Berenger and Khan opened for SSC to face MCC opening bowlers, Garner and Rabbani, both of whom bowled tightly, Garner 0 for 10 off 5, Rabbani 0 for 22 off 4. Fudge was given his opportunity to move quickly towards the food table and took two wickets in his first over, Berenger who went for 6 brilliantly caught right hand – left hand by Brunskill in the slips and Renner, caught behind by Furlonger, for a golden duck. In all MCC used nine bowlers, the pick being Algar who took three wickets in only his second over, finishing with 3 for 8 off two overs, which included 4 wides. Captain Blades brought himself back on to get closer to curry table and finished with 3 for 11 off 3.4 overs, SSC being all out for 159 in 34.4 overs.

After a quick tea which included some really splendid cup-cakes provided by Mrs. Jet, MCC openers Mitchell and Algar took the field to face SSC openers, Ravi and Sampath. Clearly they were feeling a little peckish for the runs flowed to some beautiful stroke play and after 125 overs with the score on 114 for 0, Mitchell retired having made 56 off only 40 balls and was replaced by the MCC phantom cricketer Caspari, whom no-one thought would turn up as he was last seen in Venice but made everyone very happy to see him again. In the 17th over with the score on 122, Algar retired having made his 50 off 50 balls. He was replaced by Brunskill who, together with Caspari, proceeded to nurgle off the required runs until Caspari went for 16 in the 27th over with the score on 155. He was replaced by Sestan who played the straightest possible of straight bats to the three balls he faced leaving Brunskill to make the winning run, a single off Sampath.

The match finished at 17:22 leaving more than ample time to attack the cool fresh, enjoy the marvelous curry and marvel at the Sri Lankan predilection for whisky and coke. It was an enjoyable social occasion and many friendships deepened as a result, play hard and party hard afterwards being the motto, with the hope expressed that the event could be repeated in 2014.

As usual a group of hardy members, ten in all, retired to the Chinese Tower at around 8:30 and stayed until well after midnight sorting out the problems of the world.

Footnote: Mitchell and Algar both count as “retired out” for the match result but MCC has always considered retired out as not out for the club statistics. 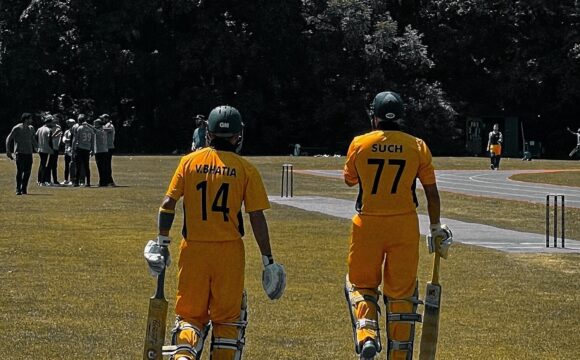