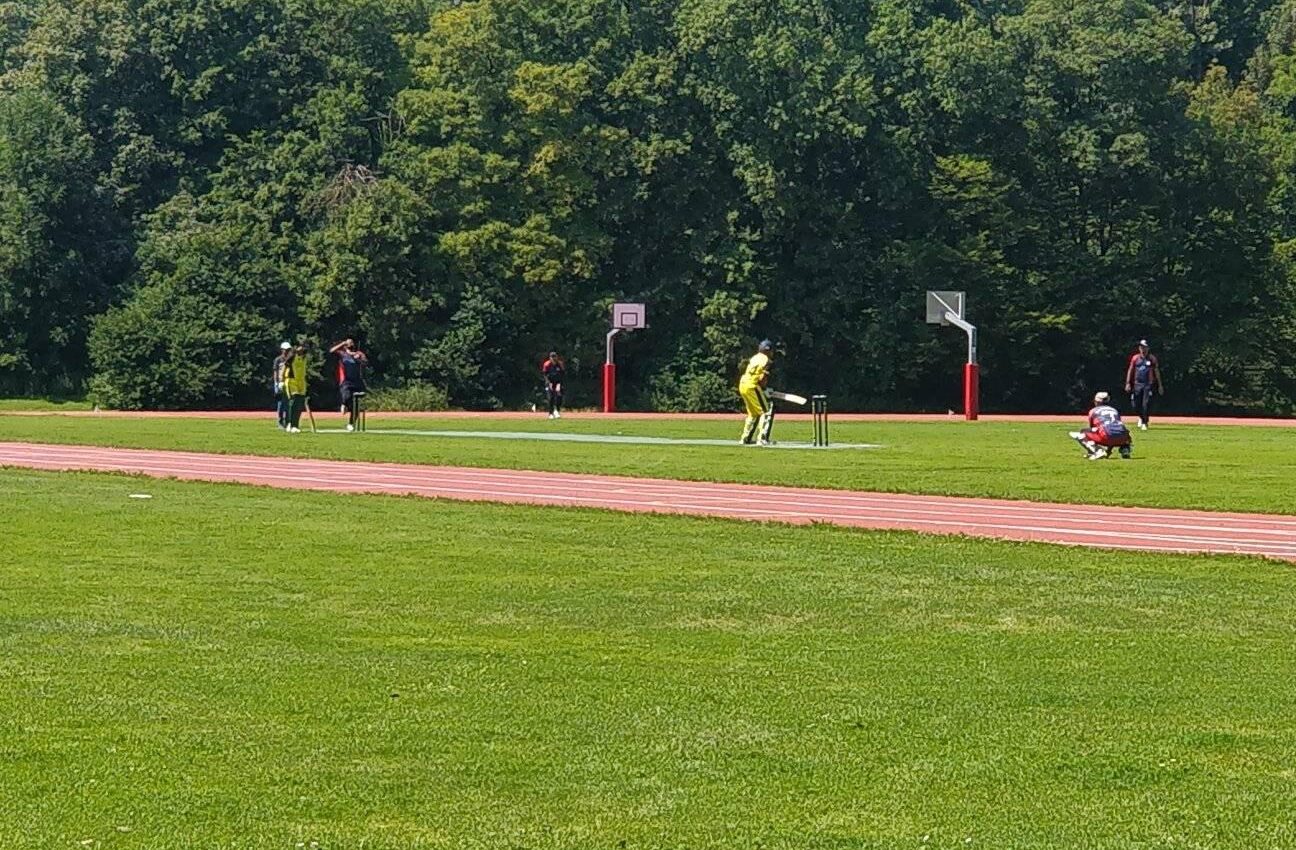 There is only one thing we at MCC should rate more highly than the need to win and that is to play the game in the right spirit.

Reports of the league games from the previous week were of a farcical nature at best and more honestly, infuriating. No side should want to win using that behaviour and MCC will never stoop so low.

Arriving at the ground we found the MICC team were already there and keen as mustard. “Hellos and welcomes” were made as the gates were unlocked. The ground was prepared, all the necessary documents produced and signed for the umpire.

Nonsense continued to be absent as the captains conducted the toss and MLCC elected to field first. Indeed nonsense failed to arrive at any point during the day. That is not so say that the day was incident free…

Ankit and Vishv got us off to a solid start, making 20 and 24 respectively. Scoring was steady as the flicx displayed some of its old traits, some balls leaping from an ordinary length and others skidding low. It was later realised that the flicx had been laid about four metres too far towards the pavilion, beyond the area that has benefitted from regular rolling and so that end was behaving erratically. The first real proof that our efforts have made a significant difference.

The fall of wickets and scores thereof are not to hand, but Ankit was the first wicket to fall, caught. Varun was run out without facing and all the good work of the openers was in danger of being rubbed out. Sundeep holed out on 5. Mucca, similarly on 9. 7 for Ben Fulton, again caught. JD chipped in with 13, caught. Imti bowled for 5. Waqas didn’t trouble the scorer, bowled. Mishra holed out for 6 on the last ball of the innings, leaving Arun Not Out for nought. With extras, MCC accumulated 103 in their 20 overs, for all ten wickets. Enough? It was hard to tell.

Of course the above reads very simply, but it doesn’t give the whole story. Certainly the foundation from Ankit and Vishv was very important. From memory we were about 40 – 1 after 7, when Ankit fell. 50 – 3 -10. Setting that base meant the fall of a couple of quick wickets didn’t hurt us as much as it could have. The fact that the rest of us didn’t make bigger scores was offset by the impetus of our innings. We kept the run rate at 5 though we lost wickets. The running improved and that also helped keep the pressure on. MICC also dropped catches which was causing frustration in their ranks.

By the time the innings ended Wembo, our designated 12th man had arrived at the ground, happy not to be playing. All thoughts of a restful afternoon supping cold beers under a tree that, apart from Desmond Bradley, has watched more dramas play out at The Hirsch than any living thing, were cast asunder by a short, peculiar on-field episode. Indeed the eminent Mr Bradley was ensconced beneath the tree to witness it.

Having walked out to bat we were a little perplexed when Arun chose to then call for a helmet, before he faced his first ball. “Why didn’t he take one with him?” The collective thought. Play was suspended while a helmet was found, conveyed to the middle and adorned. The ball was then delivered, missed by a shot that dragged Arun out of the crease and had him toppling over to try and get back to safety. The momentum of the shot had apparently left his arms in no position to protect his fall, resulting in an inglorious 90kg face-plant. The helmet which was meant to protect him cut in to the bridge if his nose, producing the customary gush of blood normally associated with watching a bouncer rather too closely. Wembos’ chips were well and truly cooked when Arun decided to head to A&E for a couple of stitches, but not before he returned to complete his innings after the fall of Waqas’ wicket. A real team gesture.

The good news is that Arun is fine, beyond a couple of stitches and an incident he probably doesn’t want immortalised here.

Wembo could not even lack of kit as an excuse not to play. We had taken delivery of our new livery just the day before and were all resplendently canary yellow with a hint of black. His new uniform was waiting for him at the ground. “Bloody hell!”

As we prepared for Imti to deliver the first ball, the opposition captain was driving Arun to the hospital.

Waqas struck in his first over, Imtiaz in his second, MICC were two down fairly rapidly and runs off the bat were not easy. Runs from extras however were another matter. 23 wides were bowled in the innings and two No Balls. And that is from a poorly maintained scorebook, kept by the batting side. I guarantee you this is conservative. No side bowling like this deserves to win.

MICCs’ 3 and 4 stuck around, making 24 and 10 respectively while the extras kept them in the hunt. Mishra came on and bowled a double wicket maiden that both broke the stalemate but also released a flow of runs ar Rama the opposition skipper. Rama came out to bat with purpose and began to plunder the boundary.

In the end MCC did prevail, despite making life difficult for themselves with the extras.

MICC seemed broken, perhaps because they felt that their dreams of ECL stardom on YouTube had gone? \_(ツ)_/¯

Sensing the ructions in their ranks and for a change winning a toss, MCC asked them to do what they really didn’t want to do and bat again in the second game.

This game was abbreviated to 15 overs due to time constraints and MCC we quick to pounce on the oppositions mental frailties. Wickets fell from the very first ball, Waqas removing the opener, caught Imti. That is how my memory has it. The book has him out first ball of the innings for 9. (⌣_⌣)

It is so hard to make head or tail of the book that I can’t help but simplify matter and report that we won. They managed 82 from their 15 overs for 7 (I think?). We chased them down at the price of four wickets. Ben looked good at the top of the order for his 14. Sundeep made a classy 21. Varun put the first game behind him and also made 21. Ankit 3. Mucca not out with Vishv for 7 and 1.

The book reports just 9 extras from us in the 15 overs, but the book does not add up and you can say that there were several missing. If we want to respond in the coming weekend to the travesty of the games before, then this will not do. We have to bowl tighter as a collective.

Waqas took two, Imti 1, Mish one and Ankit two, plus a couple of run outs.

The MICC boys need a good hand too. They played in the spirit of the game, which meant there were no silly shenanigans, which in turn made it a pleasant atmosphere to play cricket. They are among the best of them, when it comes to oppositions we should play more. I made a point of sharing this with them and thanking them for it. They in turn wish us well next weekend as they shared a similar experience with the side we seek to tread down. If we simply play good cricket, we will.