With some last minute changes in playing XI, MCC managed to put a strong team for the 3rd league game of Regionalliga against our visiting team Pfaffenhofen Cricket Club. Though MCC won back to back two away friendlies against same team (low scoring), our rival seemed enthusiastic, focused and were ready to bring on heat.

Skipper Wembridge won the toss and elected to Bat first. Arun and Zeeshan were sent to open only to see Arun walking back after being given LBW (which he claims was not out). MCC was 8 for 1 after first over.

As infamous as the MCC Flicx wicket is, it started playing tricks with batsmen. Wickets kept falling at regular intervals. After 6 overs MCC was 17 for the loss of 4 wickets. Zeeshan and Max started building a steady partnership but once again some wrong call was made and Zeeshan saw himself walking back.

Later Max who was joined by Pierre then started playing some responsible inns with partnership on 13 runs. Unfortunetly Max became a victim of the Flicx and got bowled, Skipper Wembo replaced him and continued with another important partnership with Pierre for 34 runs. At that moment MCC looked good but again wickets started falling. Somehow MCC managed to 110 runs on the board. An excellent innings by Pierre, Max and Wembridge under pressure.

With a Low target to defend, MCC begin their bowling with wicket machine Waqas Khan who took first 3 wickets and PAFCC were 14 for 3 after 5 overs. The combination of Waqas and Imtiaz worked perfectly for MCC. This duo was later replaced by another Right and Left bowlers Max and Pierre who didn’t let their opponents score and kept pressure on. Max was able to get well-set batsman Ghuman caught at covers by Pierre. After 20 overs Pfaffenhoffen were 62 for 5. Some motivational words and another change in bowling brought MCC close to victory. The perfect line and length of Macca kept building pressure and taking important wickets. Shashi joined him as the visitors started swinging. At the climax, the visitors needed just 4 runs in 48 balls. Skipper again came up with his wicket-taking bowler Waqas and the last delivery looked like this:

Waqas to Saber Ali (who was set and hitting) – A comparatively weak ball – Plays it in the air – Varun goes under ball – First fumble – Second fumble – Caught – MCC goes crazy.

As MCC never gave up and kept fighting til the last moment, we were victorious.

Man of the Match : Waqas Khan

Author’s Special Awards :
Pierre du Plessis for valuing his wicket
Varun Deshpande for not dropping that catch
Sumeet Naag for doing world most thankless job and being GREAT at it. 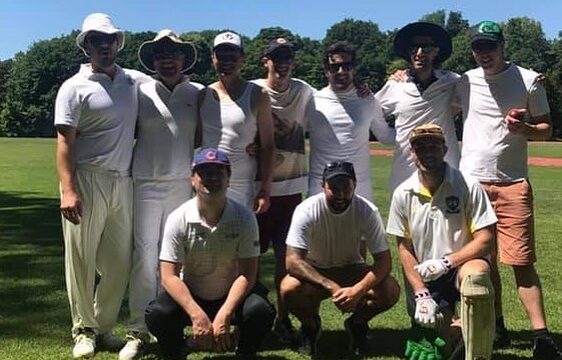 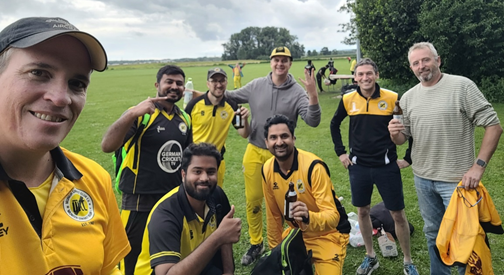