Worm continues to turn for MCC against Wurmtal

And now for something completely different.
Stand-in skipper Wembridge, Andrew of Melbourne, elected to bat on a pleasant enough day with temperatures in the teens. Thankfully it wasn’t too hot as it was a first match in black clothing ever for some, but it did represent an opportunity to sport a rather fetching Plymouth Argyle polo shirt. A chance that was never likely to be shunned.

The skipper’s excellent tossing skills look to have been vindicated as the openers Mahmoud Khan and Varun Deshpande racked up 73 untroubled runs by the 15 th over before the dashing “Desh” departed for a top-scoring 35 and “Macca” followed soon after for a well-constructed 34. Going into the mid-innings break at 101-2, MCC were looking well on course for 200+ with Maxi and Mudi at the crease. Ultimately, both M & Ms were eaten up for 15 apiece as wickets began to fall in clumps, bunches, rather too quickly and the all too familiar mad scramble for black became rapidly apparent.

Sumeet hit a sweet straight six before succumbing shortly after for 8, Gaikwad lobbed one up for one and Lovell’s return to the league side after a hiatus of seven years didn’t go completely to Planegg as he was bowled off his pad / foot (for possibly the 71 st time in his MCC career) by a Wurmburner in Wurmtal. Or maybe he just missed another straight ball — again.

Unfortunately, a few things had changed since Lovell’s last league outing, meaning that the former skipper now has approximately 70 assorted white garments up for sale at MCC friendly prices. Anyway, another vital two runs for the cause. Completely vital in the end.

Wembridge, aka “Wembo”, struggling with a groin and to add insult to injury the added burden of captaincy, fired a couple of pleasant cover drives before he too was castled for a valiant nine. Imtiaz followed for a blob and all of a sudden, the worm had turned from a pleasant 73-0 to a less than rosy 144-9.

At that slightly depressing stage, after an average of 3.6 LBW appeals per over for the pressurised umpire to deal with, there was scant humour from the next LBW shout from third man, posted 30 yards away —“THAT’S COMPLETELY OUT UMPIIIIIIIIIIIIRE!!” Never change German cricket. Never change.

It’s the early bird that catches the worm and an impressive opening spell from Waqas (8-3-15-2) and Imtiaz (8-0-34-0) put Wurmtal under the cosh on an “interesting” surface, a combination of Bolsa wood underneath carpet (tea bag). Mudi (5.4 – 0 – 43- 3) and Maxi (6-0-47-4) both managed regular inroads into the home team’s batting, but while only two Wurmtal made double figures, they both made it count with scores of 46 and 51. A stunning reaction catch at short cover from the skipper set the standard in the field, fortunately managing to avoid a broken finger off a flashing drive, while a portly former skipper somehow avoided getting maimed, naively standing too close at first slip, off a flying edge.

Indeed, there was slight panic when the Wurmtal score suddenly shot up to 150+ with still two wickets in hand according to the scoreboard. However, news soon reached the scattered MCC fielders that the scoreboard was missing an important number 4 so there was still some leeway. Just.

Despite this good news, complete panic almost followed though, when their batsman who had (up to that point) looked like he had only one shot in his locker, proceeded to launch a HUGE majestic lofted cover drive into the tennis court, thankfully not maiming a Steffi Graf lookalike on court number 1. ***Serious note, it was a tight shave though, and hopefully messages will be passed onto the relevant authorities to avoid this in the future. Somehow. Trust me, as someone who now only has one shot, the aforementioned lofted cover drive – it is a recipe for disaster. Complete disaster.

Thankfully for MCC, Macca Khan (4-0-20-1) soon came on to remove the danger man who completely played on, before Waqas took a stunning running catch on the boundary to seal the win by 16 complete runs.

Cricket was completely the winner as MCC avoided a can of worms with a tense victory in Wurmtal.

Man of the match: Mahmoud Khan 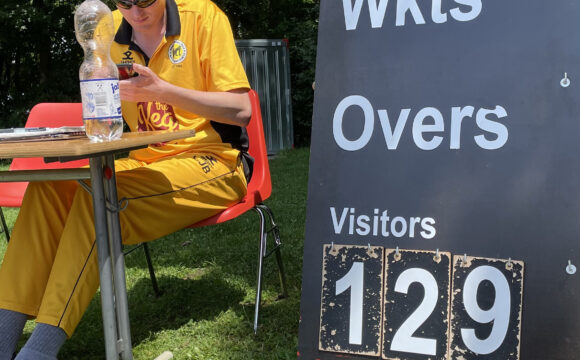