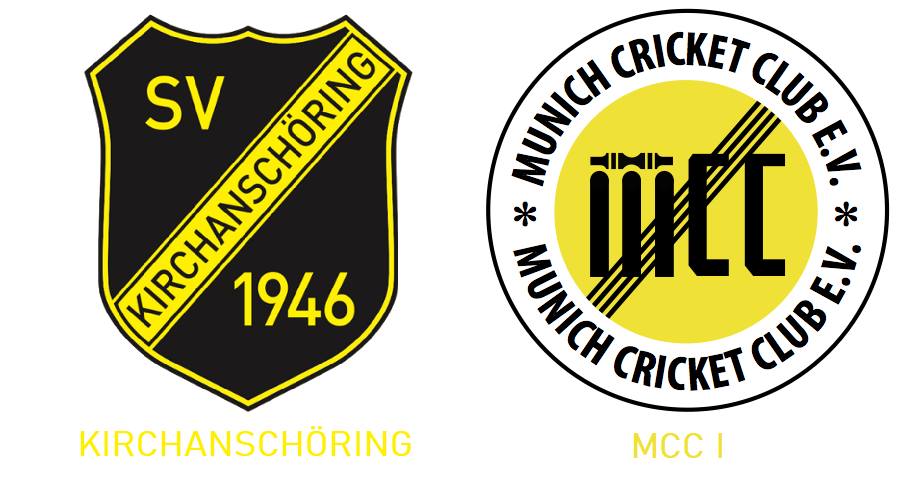 The drive to Kirchanschöring is long, sometimes winding, often serenely beautiful and occasionally surprising. Apart from encouraging countless schoolboy sniggers, en-route-Tittmoning has a long history as a border town between Bavaria and Austria, passing between both hands many times over the centuries. Driving through it requires navigating the arches in the town walls built for horse and cart, allowing for one-way traffic only. Towing large items could cause terrible queues and any mention of motor-boating in Tittmoning gets them in quite a lather.

Kirchanschöring has a pastural landscape, a 14th century church and is home to the shoe manufacturer Meindl. Out of the way as it is, a cricket team is not the first thing you would expect to encounter here. The ground is set within the running tracks of the local football pitch and boasts a covered grandstand, perfect for staying out of the midday sun. The cavalcade of three from Munich disembarked and set up camp, therein.

It is by no means exceptional that a home side with such small boundaries, will lay out the inner ring to suit themselves rather than the laws, as set out by the DCB. This is always portrayed as a logical adjustment, whereas in reality, it simply suits the playing style of a cross-batted slogger. MCC were having none of it and various playing area adjustments were made before we were able to begin.
In a break from tradition, Jonty won the toss and MCC went out to bat.

The Kirchanschöring attack is varied in pace, style and is pretty decent. Vischv was the first to get to grips with conditions and played one of the shots of the day, finding the boundary with a glorious cover drive. You know it’s good when the batsman holds the pose for just that little bit longer then necessary! A rare sight in DE.

Having the inner-ring at normal proportions also helped, as gaps were found and singles taken. We are ticking along at 6 an over when, out-of-the-blue, Vischv was adjudicated LBW. Vischv (By his own admission) does have a tendency to play around his front leg, but it didn’t look quite right to me. A little too leggy. 33 – 1- 5.4 Vischv having made 17.

Arun Joy was joined by Deeptanshu. Joy had started to tick along nicely, before losing his partner. Now the running became less co-ordinated and the two batsmen had a few mid-wicket chats to find agreement. Good running is particularly important on such small grounds.

Though the run-rate had dropped, steady progress was being made. Joy then fell to another LBW, this one far more convincing, for a well made 36. 78-2-13.1

Jonty was finding his way when he too was given LBW, on 9. This was a howler, the ball clearly missing leg. Something was amiss in umpire-land. To his credit, Jonty (Unsurprisingly, miffed) sat down, unpadded and got on with it. “Shit happens” was his view.

Floris Winckel and Deep continued the steady climb, Kirchanschöring testing the scorer with very regular bowling changes. The breakthrough came with the score on 113. A lofted ball, secured safely to remove Deep for 23.

Harking back to a different era, yours-truly wandered out in a soft cap. The Kirchanschöring bowler instantly trying to remove it with a full-toss. I was ticking along until I stupidly plonked one into the hands for deep mid-off (Deep is a relative term). Gone for 6.

Abhisheck Agrawal looked good for his 9, also caught. Chairman Bowes made a cameo 17, also caught on the boundary. Waqas came in only to see Flo given…LBW to a ball that looked suspiciously like it was missing leg. 176 – 8 – 34.1 MCC were suddenly in the dangerous territory of perhaps failing to use all of our overs.

Neeraj walked out and straight back, LBW – 0. Now MCC had Aftabuddin Maikhel and Waqas left, with stonking 5.4 overs still available.

Aftab negotiated the rest of the over, cleverly stepping inside of the leg side wides and taking the odd dart as well as a well pushed single. He kept the strike for the next over and deposited one ball for a straight six, only to fall in a similar attempt off the penultimate ball of the same over. MCC all out for 187 in 35.5. Aftab – 7, Waqas 0 N.O. – having never faced a ball.

Confident of having set a challenging total, the skipper rallied his troops as MCC took to the field. The stats suggested they Kirchanschöring had a few useful batters. Down to the openers to remove as many as possible.

Standing at first slip, I couldn’t help noticing that our umpire for the day had his left foot on middle stump and his head outside off, as you looked at him (Presuming a RH Bat). All was now clear.

As our premier opener, Waqas is the logical choice to take the new ball. The issue he faces is that pace-on means that even a miss-hit can often go to the boundary on tiny pitches. And so it was, to begin with. Three fours were had, through no fault of his and no skill of the batsman. It is an unforgiving game on a football pitch.

The skipper also took the new ball, and his lack of pace worked in our favour, forcing the batsman to put pace on the ball. One delivery dropped neatly beneath a flashing blade and MCC had their first wicket, Ramjet bowled Altmann for 12. One danger-man gone. Kirchanschöring 13 – 1 – 1.5
Waqas bowled a lovely spell, taking pace off and using the quicker ball as a surprise. He managed a maiden over in his 5 – 22 – 0.

Jonty continued to challenge the batsman’s preferred technique. This induced a more circumspect approach from the opposition captain, who was aware of the danger and bided his time. Aftab and I were first change, Aftab quickly into his work. His first ball appeal rewarded with the instant removal of said captain, judged LBW to a ball that was clearly missing leg. What goes around comes around, I guess?
My first over started well, but both Aftab and I fell off our wagons in the following overs. The first ball of my second was a No-Ball full toss, dispatched for six. Followed up by a four on the free-hit. Both Aftab and I went for 7 an over. The only saving grace being that we both managed to remove one of the danger-men, mine coming from a good catch on the boundary by Joy. KCC were still in the hunt in terms of run-rate. 92 – 3 -16.6

The decisive blow came with the introduction of both Neeraj and Deep. They are good combination, being leg and off spinners respectively. They finished with 3 wickets each, inside 7 overs. Neeraj clean bowled the last remaining real threat, picking up a legitimate LBW and a caught as well. He finished with figures of 5 – 13 – 3. Deep, with a splendid 3 – 11 – 3. In the midst of this carnage was a superb run-out by Arun Joy. Made all the more pleasing as it resulted from a dropped catch. No harm done!

If M.O.M mattered, you’d probably have to give it to Joy for his runs, catching (Someone please update the scorecard to reflect this, as Phil Bowes is still shown to have caught the one off me) and a run-out. But that was a fine team performance that made the long journey well worth it. 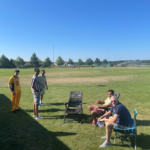