The merry band of MCC Sekunden met without incident or delay for their second consecutive away fixture, this time in the luxurious facilities of SV Lohhof’s impressive stockbroker-belt sports centre. For some, this was the first visit to Munich’s newest cricketing establishment, and what a place it is, with all the boxes for 5-star Bavarian cricket ticked: protected parking, barrier-free access, heated changing rooms, hot running water, Wi-Fi, sheltered scoring area, short boundary behind the keeper, plastic running track and floodlight pylon in the outfield, coconut matting on 11 yards of wooden boards.

We were greeted warmly by alas only one former MCC member, with the remainder unavailable for the week or selected for the SVL 1st XI (which apparently is not a first team as the club likes to mix the teams up). Whatever your view on that particular detail, it’s a nice set-up, and with the weather set to deteriorate, stand-in wicket-keeper and skipper for the day LLLL set about winning what would prove to be a vital toss and sent our hosts into the field.

Choosing the batting order was a task that our leader had, understandably, been putting off all week, with the lack of a single specialist batsman in the side flummoxing even this most seasoned of campaigners. And so it was to be a promotion up the order for every member of the XI, with even the renowned Gloria set to come in at 10.

Having not had a bat last week, and keen to stake his claim to a top-six spot, Manish quickly took willow in hand and led the catching practice, middling most of them at his terrified arc of teammates. Opening up with him was the ever-keen Sameer, and the two played beautifully at the top of the order, rotating the strike and carving the bad balls to the off-side fence with some style, Manish’s towering six over cover in the sixth over comfortably the shot of the day. After six overs, MCC were 36/0 and looking good, with the shine long gone and the wily Arun seemingly deflated and hit out of the attack. His opening accomplice Siddharth was, however, to make the breakthrough, clean-bowling Manish after a tight over, and Sameer fell LBW to the first ball of the next.

The 10 over middle-order partnership between Shivam and Adam rarely looked in danger, but tight bowling and a skiddy surface made scoring tricky. The best player in the side, Shiv played nicely and kept the attack honest with four lovely lofted straight boundaries, but when he fell for 23 with 3 overs to go the score was just 73. The lower order scrambled a few singles and MCC posted 87/6 off their 20.

Pleased to have forced their hosts to field for the full duration, an optimistic group of bowlers took to the field to defend their total. Ritwik, the pick of the attack despite a sore groin, picked up an early wicket via a miracle grab by Varun at short-ish mid-wicket, the all-rounder holding on at the third attempt. (Legal) catch of the day! But led by an in-form Arun at the top of the order, Lohhof reached their total at a canter in under 9 overs without any further casualties. A lack of traction on the increasingly slippery matting for those in flat trainers didn’t help the cause, but in fairness the collective radar seemed to be on the blink, with 16 wides and 5 no balls forcing LLLL into far too much work behind the stumps and giving a leg-up to the batting unit. The highlight of the innings was a superb one-handed reflex catch by Manish off his own bowling, he unfortunately being the only man in Landkreis München unaware that his head-high no-ball the previous delivery would see the wicket chalked off.

Undeterred, the lion-hearted Sekunden returned after a short lunchbreak into the now steady drizzle keen to avenge the morning’s defeat, and after LLLL predictably lost the toss we were unpredictably put into bat. Perhaps the SVL skipper fancied an early finish.

With Manish missing out on the second game to prepare for his trip to India, the batting line-up was strengthened by the arrival of veteran 2s stalwart Ruhel. Skipper LLLL elected to promote the handy-looking Ritwik and so-far underused Prabal and Benedict up the order should they be required later on. They would be.

It started badly. Shaken by a blow to the neck and undone by the skilful swing bowling of classy opener Siddharth, Ruhel fell fourth ball to a plumb LBW. Wickets fell steadily and runs were hard to come by, with only the stricken Ritwik, denied a runner by the SVL captain, offering resistance in a dogged 14 as partners came and went at the other end.

Benedict was over-delivering as the scoreboard operator, enthusiastically updating the score in real time. Already showing what a good team man he is in only his second fixture, his short innings ensured that no other MCC player was required to cover his duties in either match. Thanks Ben!

By the time the final pair Varun and Gloria came together at 44/9 in the fifteenth over, the game already seemed gone, but both set about improving their averages and getting some much need time in the middle under their belts. Both looked solid and organised, with every textbook shot applauded and envied alike by both sets of players. “Wow, why didn’t these guys come in earlier?”, they asked. Alas, the bell rang on this education session as Varun was finally undone by a straight one for a well-made 0 from only 13 balls, leaving the unfortunate Gloria stranded just 99 short of a century at the other end. Her time will come, surely.

Leader of men LLLL set about ensuring there would be no “thanks for coming” award on the day, with Prabal, Pryke and Ben brought into the attack to complement the cunning old dog Ruhel. Buoyed by Shivam’s offer of a beer to every wicket-taker, Prabal once again showed he is a man for the big occasion, bowling tightly and trapping the SVL opener in front in the first over. The match remained in the balance for about 3 minutes, but with 3 boundaries in the next over the hosts were well on their way. Pryke deChambeau, bowling for the first time in a league game since bulking up and becoming a seamer, looked impressive and was unlucky to go for a boundary off the last ball of his over, his attempted bouncer sitting up nicely off the matting.

Despite tight fielding, the game was done in the fifth over. A bit of a spanking I’m afraid to report, but the few players who had worked up a thirst were at least able to make the trip to the Hirschanger to watch the closing stages of the 1s’ game against Würmtal.

The Sekunden looked decent in the first game, but ultimately just one boundary in the second half of our innings meant that our total was at least 40 runs short of par, and the hosts’ familiarity with the surface and fine orthodox stroke-play punished us. The second game, whilst enjoyable, was a cricketing disappointment. Even our depleted batting contingent should have posted a better score. Stand-in captain LLLL did a tremendous job of leading the troops and his fledgling wicket keeping conceded not a single bye across two games. The atmosphere in this group is a pleasure to behold, and after two games on the road we’re looking forward to gracing the Flicx next Saturday against Attaching – the only side we defeated last year. No pressure lads! 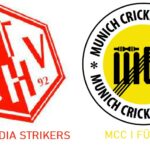 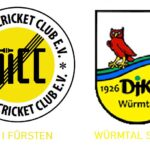 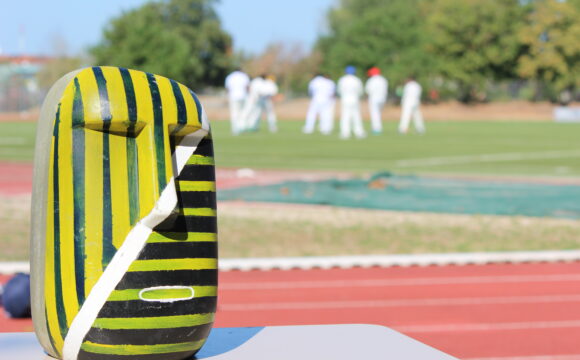