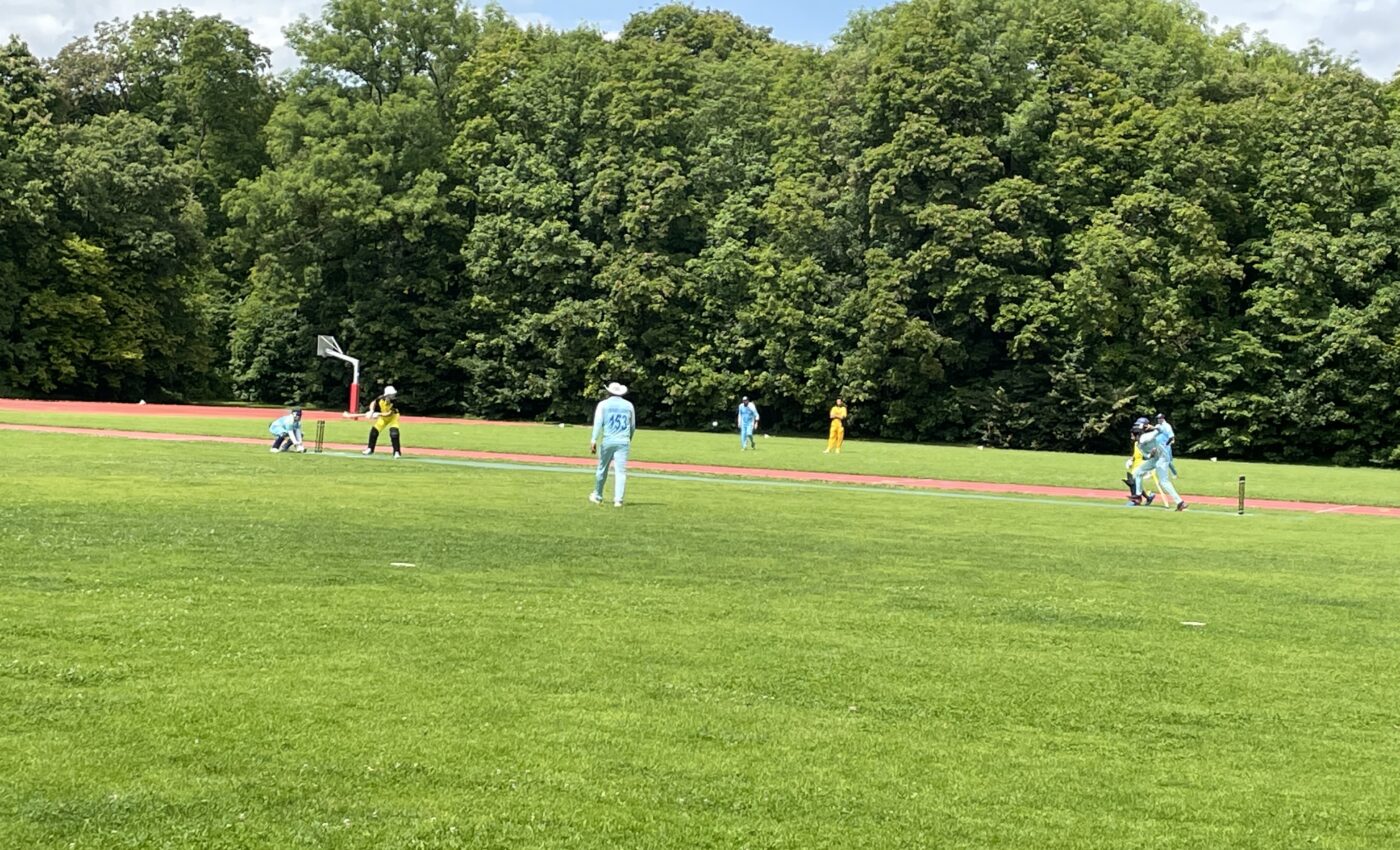 This was one of those rare times when our skipper Jonty Oldmann had the privilege to choose his playing 11 because 12 people had marked their availability for this game against MLCC.  The weather doing it’s part as well, it did not rain and in the end turned out to be a fine day (as per English standards) for a game of cricket.

School holidays in Bayern have led to the cancellations of the Friday training sessions, and the team had the pleasure of mowing and laying the Flicx Pitch just before the match. As the team entered the ground, Wembo was seen in his usual abode, the shed – probably must have ‘übernachtet’ there.

Jonty lost the Toss and was asked to bat, him along with Vish opened the innings. The very first ball was a full-toss above the shoulder and was rightly punished for a boundary by Jonty. However, it was not declared a ‘No-ball’ by the leg-Umpire and main Umpire. The next ball which should have been a free-hit actually led to the fall of Jonty’s wicket – caught and bowled by MLCC’s opening bowler. Vishv missed the smell of Jonty’s dreadlocks and gave away his wicket right after to join him in the dressing room – although like every other time, he claims that he wasn’t out (this time his grievance was genuine though, smashing the ball onto his foot before being adjuged LBW).

Suchit, followed Jonty and Vish soon and got himself run-out. Wembo and Ben both scored a duck and Argha played a very slow innings, holding the post. Mucca on the other side kept the scoreboard ticking and ended up hitting two boundaries, 50% of the boundaries scored by MCC. He was the top scorer with 22 runs. Shivam came in handy as a pinch hitter and scored 13 odd runs.

MCC was good at bowling, stood tall to defend the total of 67, giving away 16 extras. Waqas was as effective as ever, bagged 2 wickets for 11 runs. MLCC won in the 16th over by 7 wickets.

Phil Bowes appeared on the ground with the entire Bowes clan and threated the captain Jonty for a spot in the playing 11. He comes from Birmingham after all!

Our good man – Mr. Oldmann lost the toss yet again and MCC was asked to bat. Shivam sat out to give Phil a chance to flaunt his cricketing skills in front of his family, volunteered for leg umpiring. What a clubman, captured Argha’s run out in the very first over on video but cheekily gave a ‘Not-Out’ and got some well-deserved abuse hurled at him. For a change, this time by the opponents.

Classic MCC running between the wickets, Argha got run-out (karma is a bitch!) in the next over. Jonty came in to bat next. Mucca was sledged while batting, Jonty rightfully lost his cool and got into a row with the opponent’s captain. Consequently, there was an unpleasant and much dramatic send-off to Jonty by MLCC.

Wembo went on to bat and entertained the crowd with his calling skills and not just educated Mucca but also the opponent team with some very loud calls! Münchener Merkur reported later that the Mädels surfing on Eisbach almost fainted! Wembo was the top scorer of the 2nd game with 18 runs.

We had the pleasure of seeing Ben Fulton play some lovely shots which however could never make to the boundary because of the slow Hirsch outfield. He compensated that by hitting a lovely six straight over long on. He scored 17 runs.

MCC ended the innings by batting 20 overs and scoring 82 runs.

Waqas and Billy opened the bowling and built great pressure on the batsmen. Both had an excellent economy rate while Billy managed to get a wicket in his first over. Craig had an exceptional spell giving 16 runs off 4 overs and got their captain stumped and thus bagging one of the important wickets. But the match was draw in the 19th over when Waqas’ ball caught the edge and went for a decisive four. With the winning run coming off as a leg-by, MLCC won the second match.

The team met at Keg for Craig’s farewell and had a lovely time. 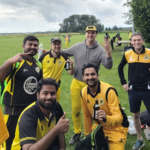 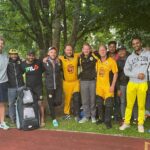