MCC II vs Opposition
Due to Data Protection I shall be removing the names of the opposition team and players. Should you have any issues with this please contact me at: dataprotection@mcc.fu.

Cricket is very well known for being a game the Germans do not yet quite grasp, lasting longer than a football game, only being played when its dry outside and the general consensus is that there are 22 people on a field who don’t quite seem to know what is going on.

Today’s game disproved the former and the latter. In between all the rain breaks we managed to play a grand total of roughly 90 minutes of cricket (plus stoppage) and there really were 11 people on the field that didn’t quite seem to know what was going on.

As this writer begins to mull over today’s events, he begins to fear that the match report may very well be longer than the game itself, but I shall keep the details as brief as possible. All (majority) of our team turned up on time and we had everything set up for the allotted starting time. However, because rain, umpire for the day Ravi decided to hold off on the first ball, much to the pleasure of the opposition who had 10 minutes earlier made said umpire aware that they didn’t particularly fancy playing anyway.

After a short delay we stepped out onto the field in very, very light drizzle much to the protest of the opposition. Opening bowlers for the day were #59 and Abhijit, both bowling their preferred right arm medium-fast. But then, the downpour began. Not from the heavens but from the right hands of the 2 bowlers. The first wicket fell in the 1 st over of the day; a fantastic leg cutter* from #59 taking out middle and off stump. *when I say leg-cutter I actually asked #59 what his action was and he explained to me that it just comes out of his hand like that.

#59’s second over also brought a wicket with batsman #5 from the opposition smashing the ball straight up in the air where a very confident Bowes screamed ‘MINE’ (this is actually the incorrect way to call for a ball in the air. In order for all confusion to be eliminated it is always recommended that one shouts one’s own name making the remainder of the team aware exactly who is underneath the catch).

Anyway, Bowes caught the ball and what followed was a deluge of complaints from the square leg umpire (I believe player #11) who claimed that Bowes had actually dropped the ball, mainly due to the fact that having made the successful attempt Bowes then threw the ball in the air in celebration and let that hit the floor. The batsman who had hit the ball (#5) then chimed in with his two cents before umpire Ravi made the executive decision to award the wicket to MCC. Please note: According to the rule book the above mentioned ‘drop’ constitutes a dropped catch and therefore Bowes was not awarded the catch.

Abhijit then got his second moment of glory (moment 1: provided his spare shoes to a rather forgetful Bowes) when he uprooted the off stump of #18. #59 then claimed his third wicket of the day – I believe Praf took a catch, but the scorebook isn’t fully correct due to the opposition failing to utilise the laminated instructions kindly provided by father-to-be Wembridge (who later became rather infuriated after the opposition decided to mark the letter ‘W’ for a wide ball).

At 20-4 the opposition had had enough and sent #11 on to the field to complain to Ravi about the rather light drizzle coming from the sky. Light drizzle is defined as: a light liquid precipitation consisting of liquid water drops smaller than those of rain – generally smaller than 0.5 mm (0.02 in) in diameter. We were barely able to see said rain, but umpire Ravi made yet another executive decision and off we went.

Upon returning to the crease MCC’s attacking openers continued with Abhijit claiming his second wicket of the day very quickly, bowling the opposition captain, who got a rather loud send off where he was informed by the majority of the on field players that we ‘definitely didn’t drop that catch’.

2 bowling changes brought Praf and Ankur in to bowl. Ankur really was not messing around and took 3 wickets in his 2.2 overs. I did later however have a word with Ankur for his bowling performance as, upon reviewing the scorebook, it appeared that 100% of his runs conceded were from wides (all 1 run). Please improve for next week Ankur. He did take a splendid C+B and cleaned up 2 batsmen by bowling straight.

From the other end Praf was also running wild taking 2 wickets, the first caught by Bowes at mid-on and the second caught by Doug. A great wicket actually. Batsman spooned the ball in the air to Doug at square leg followed very loudly by a cry of ‘oh f*** o**’ from Doug, who could be heard from the Chinese Tower as the ball came very gently towards him! He took a very good catch, watching the ball into his hands above his head causing commotion from the MCC players who were just ripping the opposition apart.

The innings ended with the opposition 43 all out. 16 of those came from wides. We did however
take all our catches, apart from Bowes who dropped his and the 12.2 overs we were out in the field really were thoroughly enjoyable and the team spirit, lead by captain Praf, really is brilliant to be a part of!

MCC ran off the pitch with the opening batsmen informed that they were to be padded up and back out on the field in 5 minutes. Fortunately Arun hadn’t taken his pads off after his half time net session, so we were just awaiting the entrance of Faf du Plessis.

Out we went, 44 required to win. I won’t write too much about this, but the long and the short it that it started raining again, so Pierre kicked on and after some glorious cover drives sadly departed for 20 from 26 balls. He later informed me that ‘that would have been worth 40 in South Africa’.

Arun was solid. Having been asked to anchor the innings (I am still disappointed that captain Praf didn’t send Ankur to do this job) he departed the crease for a very well made 7 from 21 – great stuff mate, keep up all the training!

Next in was ‘good omen’ Busby. Paul has now played 3 games for MCC and we have won all 3 of them! Real pleasure to have you in the team mate, good enthusiasm and great banter. Sadly, he decided that with 2 to win he would try and smash Helmuts van. He missed the ball. He lost his off stump. We all got a good giggle out of it though!

Praf and Faraz completed the innings, Praf got 1, Faraz (very proudly) announced that this was his second not out in a row (adding a further 3 runs to his average!). In all fairness, the opposition took it all very well, everybody shook hands and nobody got hit by a cricket bat.

Cricket was the true winner today, followed closely by us.

We hung around to clean up, Praf paid for all the beers (lad) and at 1930 we waved farewell to Helmut for another Saturday and went our separate ways.

Scorecard can be found online (thanks Shashi!):
https://www.crichq.com/matches/659700/1st_innings 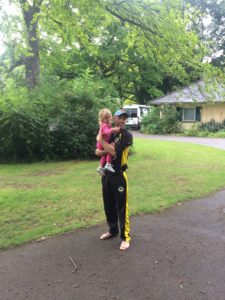 (Your correspondent with yet another screaming Wembridge.) 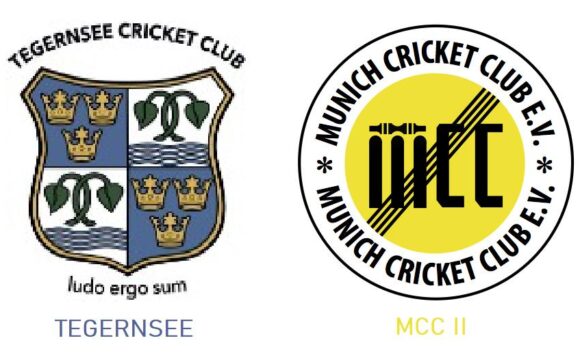