Warm and sunny Saturday afternoon greeted the MCC team which was visiting the new looking CCB on their new ground in Westpark. Jonkiffe, Wembridge and Toke were told by a certain MIC player who they met Enroute to the playing field that they were mistaken and CCB played in some other part of Munich. Thankfully the address was correct and the MIC chap wasn’t. Not so thankfully we had only 8 players present at the ground. Sandhu, Shaikh and Michelles completed the touring party at 12.30 in time for the toss.

Captain Toke lost the toss and MCC was asked to showcase their batting strength. In the very first over Otmankhil tried to steal a non existent second run only to find himself heading back straight to the shed. Wembridge joined MCC debutant Deshpande for a nice partnership which steadied the MCC for the next 7 overs adding 22 valuable runs. Deshpande played a lovely on flick over the square leg to register first boundary for his side. Soon after he was dismissed trying a similar shot bowled by right arm fast bowler Anup. Jonkiffe took a leaf out of Wembridge’s book and blocked all the deliveries successfully until he was bowled for 1. Debutant Shaikh from Paris was dismissed tried to play a cheeky flick for 1. Captain Toke looking to lead from the front was dismissed while trying to play spin on the back-foot for 3 runs only. Michahelles attempted another suicidal run and therefore departed leaving MCC at 60 odd runs after 20 overs at the drinks break. Rejuvenated Wembridge played nice aggressive shots to keep the scoreboard moving. He was very hard on Simran, the experienced CCB bowler, hitting him for a glorious six over covers and one over mid-off. Wembridge stitched a good partnership with patient Sandhu to take MCC past 100 given the total some respectability. Good support role was played by Hashimi and his friend Ahmed taking the score to a respectable 147 in 40 overs. Wembridge played a magnificent 79 runs followed by generous 34 wides from the CCB bowlers. All the other batsmen weren’t able to gauge the pitch and were just rusty as it was the first game of the season.

After the lunch break, MCC opened with bowlers Bhatia and Hashimi with the new bowl. Bhatia struck in his second over thanks to a great catch from Michahelles in the second slip. Ringer Ahmed bowled tight lines and swung the ball which was very commendable since he was playing his first hard ball game . Spinners Sandhu and Toke got 2 wickets each to create some jitters in the CCB dressing rooms. CCB highest scorer Tayyab survived a straight forward caught behind appeal of Toke however was run out later to give MCC a ray of hope. Batsman Samar and Shamshad ensured that no further damage is done and took CCB very close to the victory. Pace bowler Ahmed bowled well and broke the partnership which unfortunately was very late as CCB cruised their way to the total in the 26 over. 30 odd wide deliveries bowled by all the MCC bowlers helped the CCB cause in a great way.

It wasn’t the ideal season opener for MCC however areas requiring improvements were highlighted. Wembridge provided a template to all MCC batsmen on how to construct an inning in a 40 over game. Thankfully no catches were dropped which was another positive coming out of the game.

MCC lost the toss and batted first
Lost the game by 3 wickets
Man of the Match : Andrew Wembridge
Special Thanks to Doug Giles for helping with scoring. 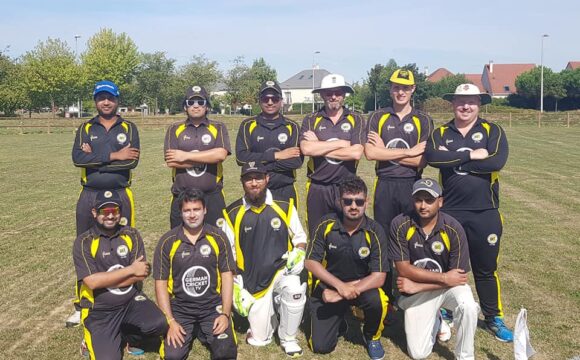