Tom Mitchell`s team, Linfield, in Surrey, came to Munich for their first ever international tour. Tom played for us while studying in Munich from 2013 to 2015, scored 405 runs making him a page 2 batsman and also took 10 catches. Obviously we were keen to host his team but the damage to the playing field at our home ground put the Kybosh on a joyful return to the Hirschanger. Fortunately the Munich Lions were on tour to Prague so they kindly rented us their ground in Situli Strasse. The pillock with the keys to the ground turned up without them so both teams had to vault over the fence while`st the pillock returned home to fetch them. It was then discovered that neither the expected nails to fix the wicket nor any stumps or bails were to be found. Barrett and Bowes, alliterating in “B”, headed to the Hischanger, Bowes standing guard while Barrett vaulted yet another fence to fetch the necessary from our kit box.

Finally the pitch was set up, the pillock returned to open the gate and learn that captain for the match Bowes had lost the toss and MCC were fielding. The weather at the start, around 1pm was OK but Barrett insisted the forecast was for rain from the start so it was decided to play 2 runs for any wide or no-ball and the illegal ball not to be repeated. MCC opened the bowling with Butt and Bowes, everyone wishing the captain for the day would be tonked thereby removing the miscarriage of justice at the top of the bowling table. Butt got the first wicket, stumped by Barrett, with the score on 23. The second fell, bowled Deverill, with the score on 99 and the third a superb direct hit run out with the score on 151. Bowes, who had indeed been severely tonked, brought himself back on and got a hilarious stumping with the score on 167. An unbroken partnership of 46 for the fifth wicket took Linfield to 213 for 4 after their 20 overs.

With Cassandra still predicting rain it was decided to finish the second innings before taking any teas so Bhat and Mustaq opened for MCC. After 26 were on the board, Bhat left to a caught and bowled to make way for Konchada. Twenty eight runs later Mustaq was caught by Henry Mitchell, Tom`s younger brother who is just as elegant as Tom when batting. Amazingly, Barrett, the batsman who epitomises “Batting sans Frontiers” was next up and was part of a 3rd wicket partnership of 38, Barrett being bowled going for a big one. Along came Butt needing 38 to make the 500 club, striking the first ball distainfully for a boundary four but was then out caught. Next man was Jonkiffe, he with the car that takes five passengers, determined to make his first runs for the club. Ten runs later he was bowled but had scored one run to his great satisfaction. Khan Mahmud, the top run scorer of the season so far, came in next to be run out for 10 and make way for Bowes. An unbeaten partnership of 46 for the seventh wicket took MCC to 186 after 20 overs.

A second match was begun almost immediately with no real tea break, leaving the batting side to feed themselves when able. Teas were once again not provided by Qureshi, he was rumoured to be in Prague, touring with the Lions, but all the players had been assigned a task to bring something. Deverill reneged on his promise to bring along some Pimms, probably because he was too busy dreaming of his forthcoming visit to the Rolling Stones concert where he was able to obtain a couple of incredibly cheap tickets.

Linfield batted first once again, this time Barrett was captain and Bowes keeping. The bowling was opened by Deverill, on the verge of entering the 25 wicket club and Khan Mahmud. The first wicket fell in the first over, a run out with the score on 2 and Deverill bowled the next with the score on 6. In the sixth over Karthik relaced Khan and had an eventful over – 6 wides, wicket, single, 6 wides, wicket, 2 wides. Leaving them 53 for 4 down. Barrett replaced Deverill going for 8 runs in his first over and 25, including four sixes, in his second. Konchada replaced Khan and got a wicket in his second over and Butt came on after Barrett had bowled out. He got a wicket in each of his first two overs and the score was 156 for 7 in the 16th over. Bhat had one high scoring over leaving Deverill and Khan Mahmud to finish off the last three wickets.

A fast turn-around saw Altmann and Konchada open the batting, Altmann, in his first game since the Erlangen league match, scoring nine before being caught with the score on 17. Konchada and Butt put on 30 for the next wicket, Konchada scoring 19 to round off a good day`s batting. Bowes and Butt put on 51 until Bowes had his stumps realigned to make way for Deverill. Butt departed LBW for 34 and Deverill heard the death rattle very soon and left having scored one run to make way for Mushtaq. Two runs later Mushtaq went for one and was out caught allowing Bhat to enter the fray and the duck race. Khan Mahmud was run out for the second time in the same day with the score on 117 for eight. Colling, dressed most improperly, more like a mountaineer than a cricketer, scored 8 including an almighty six and Barrett allowed Jonkiffe to be run out for 0 thereby ruining his day. The rains began just as the run out occurred so there must be an omen there.

Linfield had the usual fines procedure so beloved by touring teams and had MCC a similar scheme in place we would be a rich club because of all the dropped catches, some of them more difficult to drop than catch. 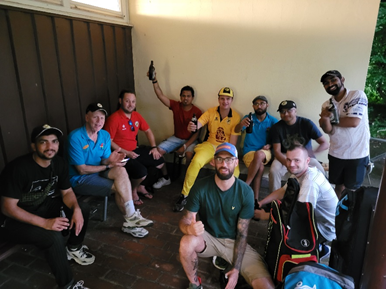