Congratulations to the MCC 6-a-side squad for reaching the quarter finals of the tournament organised by Serendib.
It was a very colourful affair with 17 teams from Frankfurt, Wurzbung, Göggenheim, Burghausen, Tegernsee, Pfaffenhofen and some other places as well as most Munich clubs, arranged in three groups of four teams and one of five and virtually each team in different coloured clothing. Scheduled to start at 08:30 with everyone being present at 08:00 MCC were down to three players then which rather messed up the organisation as we were scheduled to play the first match against the Lions. Mahmoud Khan was there at eight but realised he had left his bat on the U.Bahn so went looking for it and didn`t return until around 09:00, still with no bat. In the meanwhile Imtiaz Ahmad had arrived but nary a word from Maiwand Khan Zazai so we borrowed a player to make up six. The first game against the Lions was won quite comfortably, the second narrowly lost to one of the three Pak Orient teams participating and the third won easily against someone. The good run rate meant we qualified for the quarters and played another of the Pak Orient teams and were thrashed although we were still in with a chance until a rather foolish run out cost the last wicket. In the four matches MCC had shown some excellent batting and bowling skills with some sublime catching. One in particular from Imtiaz Ahmad, a caught and bowled to a ball which endangered any low-flying aircraft and taken so casually was impressive. There were of course some dollies dropped too. Young Samiullah Tanha kept wicket in all matches and performed very well, a new star in the making. In our final match Mudussir Ayub opened the batting, cooly hit a four then a high top edge was very well caught by Waqas Khan, playing for one of the Pak Orient teams. He has taken only 4 catches in 18 appearances for MCC and caught the captain when playing for the opposition. Rearrangement of the batting order next season is definitely called for it seems. MCC were actually well represented in the tournament with Butt Thomas playing for yet another Pak Orient team – the eventual winners – and Shahzad Afzal Qureshi playing for the Lions. The final between Pak Orient and Wurzburg was played in almost complete darkness. Pak Orient were declared winners after Wurzburg left the field claiming there was cheating on the part of the umpires when an apparent high ball was not no-balled. Actually neither Winsley Fernando standing at the non-strikers end nor I at square leg could see the ball to call it.
There were three candidates for best batsman, Mahmoud Khan among them but Butt Thomas was the winner.
It was unfortunate that the sun set an hour too early and so affected the game, perhaps next year there will be fewer teams or a bowl-out arrangement if the light/weather is too poor.
Nevertheless MCC had a most enjoyable tournament and have sent out a search party for Maiwand Khan Zazai from whom nothing has been heard or seen. 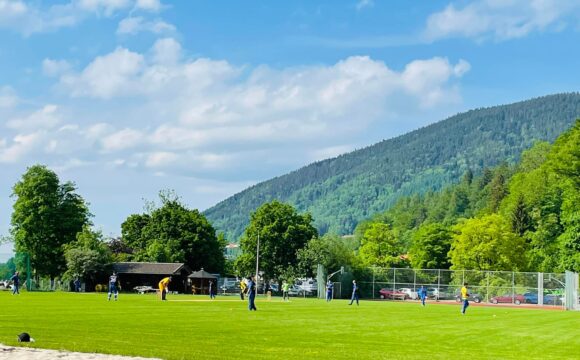