Skip to content
Home2017Match Report vs Munich Lions (Breakaways) (01 Apr 2017)
2017Match Reports
MCC6th April 2017933 Views
I would start today’s report with a humorous wit, alas it is no further the day of the April fool and I shall therefore withdraw my previously thought comment. We began the day almost on time with 10/11 team members turning up on time. I shall not mention which member turned up late by name, but instead recount the tale of his innings in which he scored a 50, carried his bat and watched as his 10 other team mates once again failed to reach the seemingly unreachable 40 over mark. Please note that I do not have the scorebook and the report may be somewhat off. Captain Saki Kaskas (I shall let the avid reader research why this is funny) won the toss and decided we should have a bat. Choosing to open with Jontasaurus and Mahmud, they saw off part of the shine of the ball before Jonty fell to their opening bowler for 3. In at 3 was JD who built a partnership with Mucca of roughly 50 before he fell (run out) for an excellent 23. Muddi, Aneesh, Bowes, Toke (duck) all fell cheaply, before Colling came in a slapped a few, Nirmal did the same but both perished, new boy Jay and Saki were the last to fall leaving us with Mahmoud 57 not out, and wides 42 not out. Teas were provided by Praful including, humus, chicken, crisps and some donuts. Out we went to bowl and the game was almost over before it started. Colling (4-17) and debutant Jay (1-25) took 5 of the early wickets before erratic 2 over spells saw Muddi get 2 wickets, Saki got 2 and there was a run out somewhere in there. We bowled them out for 60. Not a lot of wides were bowled, I think about 10 in total, which is a significant improvement on this time last year where we bowled 54 wides against the Breakaways! Good day had by all including a curry at Sitar, guest appearance by Matt Parlour and Farid.
Editors Notes: The Breakaways fielded some 17 Players, not all at the same time, including three youngsters. Two of them, Elias and Levi, have transferred from MCC which will reduce the Brownie Points we get when applying for a license for div I next season. Their dress was sadly a portent of the future; ostensibly they were in their blue kit but at various times  there were players in the field dressed all in blue, blue tops with black trousers and all in white. It all looked rather scrappy. Thankfully we have taken measures that should ensure that when we play in coloured kit, everyone will be dressed the same.
The MCC innings was scored by Barrett and Giles, allowing me the pleasure of actually watching a game and chatting to Aneesh`s cousin (Rajan Kotru`s son) who was in Munich for the weekend. There were many spectators making it an enjoyable family afternoon. Even Wolfgang Albert came along to see what his competition will be after he gets a hip replacement in May.
Share: 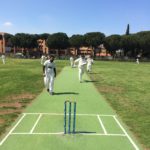