Over the weekend of 25th/26th March the MCC six-a-side squad consisting of Jonty Altmann, Mudassir Ayub, Phil Bowes, Thomas Butt, Nick Colling, James Kantor and Mahmud Khan won the coveted plate, beating the Saxon Warriors  in the preliminary round, then winning against Bautzen, Prague and USB Chemnitz on the way to the final against the Berlin Foxes who had actually stuffed MCC in the very first match of the preliminary round. In the final Berlin Foxes were 73 for 5 down in their allotted 10 overs. MCC responded with 76 for four down on the penultimate ball of the match.

Thanks to team manager and club treasurer Doug Giles for posting regular updates of MCC`s Progress. 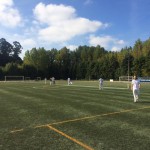