Back to the Hirschanger for a friendly against the MICs on a glorious sunny afternoon. Because of the usual bailages and because they had 12 players the MICs  lent us one of theirs,  a certain Shahil Momsin, a fairly decent player as it turned out. They duly won the toss and chose to bat first.

MCC opening bowlers, Sestan and Raubenheimer bowled well and, after eight overs, the MICs were 44 for three down. All the bowlers put in good performances and the fielding in general was good although Kashif was dropped four times on his way to a score of 78 before he finally fell to Alagh having been caught by Raubenheimer. The catch was a joy to watch, you really never saw anyone less happy to see the ball coming his way. He was so effected by it that he set up a tour to Garmish in order to recover. Algar almost took the catch of the match flying horizontally to one of Kashif’s hits, actually took it but then lost it when he hit the ground.

During the MICs innings the club was graced by the appearance of Dr. Franz Spieß, our Mental Auslander, and the first one to score fifty against Tegernsee.

After the teas, kindly provided by Sestan, MCC opened with Parlour and Alagh. Both went LBW fairly quickly – I wonder who was umpiring? Pareswaran played a test match innings scoring 17 of 57 balls while Gattinger joined the duck race with a golden one. Kumar exceeded him later with a platinum one having been run out without facing a ball. Shahil ,our ringer, scored 68 before retiring , mostly in partnerships with Pareswaran and Algar to put on 82 and 30 for the 4th and 5th wickets respectively. At 145 for 7 down after the 31st over, MCC were well on the way to victory but with a massive thunderstorm threatening. There were two run outs in the next over as we tried to force the issue but had to leave the field and abandon the game with the win tantalisingly just a few scoring shots away. 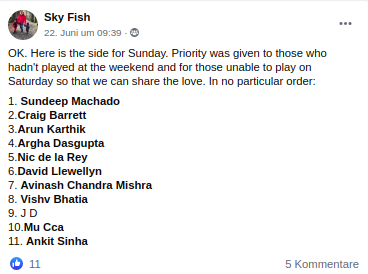