Finally our first home match of the season at the Hirschanger and that against Lufthansa who had narrowly beaten the MICS the week before  although they had only 10 men so it was not expected to be a walkover. To general astonishment, captain Sarma won the toss and chose to bat first.

MCC openers Mitchell and Veser got off to their usual promising start and put on 58 before Mitchell was bowled for 22 off 35 in the 10th over. Shortly afterwards in the 13th over Veser somehow managed to get a ball come under the helmet grill and hit him seriously in the right eye. He was treated in hospital and was able to return to the ground but not play again so he was logged as retired hurt with 39 from 51 balls with the score on 73. Sarma and O’Meagher continued to score freely and at the 20 over mark the score was 112 for 1. After the drinks break though just about everything went south and at 40 overs MCC were 164 for 9 down, the last seven batsmen scoring 17 runs off the bat between them.

Garner had provided scrumptious teas including freshly baked scones complete with fresh clotted cream and strawberry jam. There is a real danger of him getting the PTM post – permanent tea maker.

Carrie and Garner opened the bowling for MCC and Lufthansa, particularly Peter Adit, scored quickly and after 10 overs were 72 for one down. In the 11 over, Clare’s second he got the first of his Michelle, all of them bowled. Wickets were falling fairly regularly but it wasn`t until the 17th over that they fell behind MCC’s equivalent score and at the 20 over mark they were 104 for 4 down, Clare having bowled Adit for 66 in the 19th over.

After the drinks break Lufthansa too followed the Canada Geese migration south and were all out for 134 after 30.1 overs, their last 9 batsmen having scored only 28 runs off the bat.

It was pleasing that some many members turned up to watch the match and help to punish Helmut’s cool fresh – Priyesh came through the gate just as the last wicket fell and while we were on our way to the tower for post-match deliberations Paul Scott joined us having landed three hours previously from Shanghai Tthere was a happy crown at the tower in a wonderfully warm early summer evening. 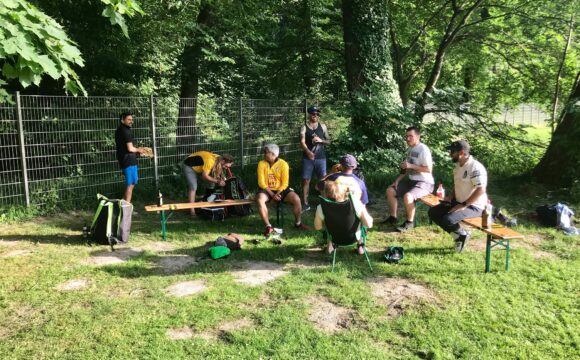