Another summer’s day at the Hirschanger, meaning it had been raining on and off since Friday evening. Nevertheless the hardy squad gathered at the ground ready to start but couldn`t do so because of persistent rain. After two hours the umpires agreed to begin but the time lost meant it could only be a 25 over match. The boundary flags had not been placed and the CCB captain demanded that he be automatically awarded the toss claiming the playing area was not ready. The umpires rejected this, captains Appavu and Sarma made the toss, which CCB lost and MCC chose to field.

Immediately play began the drizzle returned but play continued. The CCB captain went second ball for a duck in Blades’s first over which rather lifted MCC spirits.  The bowling was tight and the very wet outfield made it difficult to score. Wickets fell regularly and when they were nine down for not very many, the CCB captain, who had been in the umpires ear all the innings, presumably hoping for an abandoned match and shared points, persuaded them to call a rain break. The rain stopped and the innings was reduced to 23 overs and at the close CC Bavaria were 104 for 9 down.

After a splendid tea provided by Clare – an emergency trip to a shop to purchase some gooey cakes –  Algar and O’Meagher took the field to open the batting for MCC. Algar stayed only three balls and couldn`t repeat his Zuoz heroics out caught for 3 off Sunil. In strode captain Sarma, clearly effected by the consistent attempts by the CCB captain to influence the umpires and proceded to carry his bat through the innings. He and O`Meagher made 20 for the second wicket, and, with Weston, 49 for the third. The rain had been increasing, CCB captain continued to bend the umpire’s ear and, after 17 overs, with MCC needing nine to win, they all came off.

After a long rain break the umpires insisted play be continued but the CCB captain at first refused to do so until he was advised he would be reported and there would be consequences. The last over was bowled by the captain himself – wide, wide, dot, two, three, four –  which was rather poetic.

The umpires have written to say that the behaviour of the MCC players was at all times exemplary (clearly he didn`t see Chris Carrie beginning to explode).

Note: the bowling figures may be slightly worse than you were expecting. Although the number of wides bowled per bowler were listed, they were not entered against the bowlers figures so I corrected that.

Footnote: The CCB captain received a one match ban for showing disrespect to the umpires and CCB finished up in the lower half of the league table meaning second Division cricket for them next year. The four points they would have received had the game been abandoned would have sufficed to move them into the top half of the table. 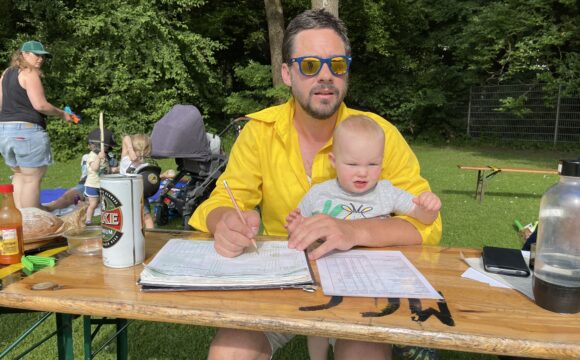