Newick is a charming classic English village with a village green, cricket pitch and choice of traditional pubs. The village is about 7 miles to the east of Haywards Heath, 8 miles north of Lewes, and about half an hour’s drive from Gatwick, Brighton or Tunbridge Wells. Newick CC hit the headlines last year when Daily Mirror editor Piers Morgan, a Newick resident and keen cricketer, recruited 5 test match stars to

Most of the chosen few flew over at various stages on the Wednesday in preparation for the club’s virgin tour of England. Games had been lined up from Thursday to Saturday, 4 games in 3 days in fact. Still ample opportunities for leisurely pastimes such as golf, cinema, alehouses or strip joints. Whatever took one’s fancy really. Bradley allegedly spent the evening in the ‘Cricketers’ Pub near the ‘Lanes’.

Hammo Hamilton et al enjoyed a sneak preview of the new ‘Terminator’ movie starring the next governor of California. It was felt that our hotel was very lucky to have been awarded a third star when the pitch inspection was done in the 1950’s. Great British fry-up for breakfast though so can’t complain really.

The next day we made an early start to the ground with Nichols having drove up from Oxford and Sembi from Croydon meeting us at our 3star accommodation. We enjoyed lunch at the Royal Oak and proceeded to meet up with MCC stalwarts/legends Jacobs, Giles and Langfelder at the very quaint ground. It would be great to play on grass again. Real grass indeed.

Lovell surprisingly won the toss and unsurprisingly decided to bat with temps in the mid-nineties for the 2pm start.

Openers VD (45) and Hebel (38) saw the new ball off capably aided by some village fielding. The pair stayed together for 22 overs before they both succumbed within moments of each other – with the score on 95. Wayne fell to a great catch by the keeper down the leg side standing up. Amos finally skied one to someone who could catch. This brought Lovell and Sembian to the crease and they motored along before Lovell fell bowled for 12 playing down the Brighton line. Sembian (38) was then well supported by Blades (12) as they took the score up to 164 in the 36th over when both also followed each other back to the hatch in time for tea and biscuits. MCC finished on 175-8 off their 40 overs as the opening bowlers attempted to cruelly expose a longish tail. Doug Gilo did stroke it along nicely though during his time at the crease. High elbow.

A great tea was then the order of the day before VD and Blades took the new ball ably supported by Andy Hebel. They reduced the home side to 50-4 before the skipper turned to the bowling experience of Jacobs and Langfelder with a combined cricketing age of over 120. They both performed extremely well in the scorching heat with Jacobs claiming 2 lbw decisions. Plumb – even the home side later acknowledged this in the bar (allegedly). Aided by a couple of tidy run outs the home side found themselves needing 20 to win with just one wicket left. Some lusty blows took them to their target in the last over in a good tight opening tour match for MCC.

We then enjoyed some hospitality at the ground and then at the Royal Oak in Newick. Some more than others. Some did express themselves a trifle disappointed to be left waiting in the dark for two hours for a taxi in the Sussex countryside but that’s another story. Thanks to Sam, Nick and all at Newick for their efforts on the day.

Lovell lost both tosses on the day. On both occasions MCC were asked to field first and ended up winning each game relatively comfortably by 8 wickets.

First up were fellow German beachtowel stormtroopers Goettingen in this international 20/20 challenge match. The Northern side got off to a poor start to be fair and never really recovered. Overnight we had indeed ‘picked up’ two good guests/ringers John and Kevin and they both shone with the ball alongside Sembi, VD, Hebel and Teddy Leopard Dean. Bradley also launched six explosive handgrenades at the shell-shocked Gottingers for just 3 runs. Goettingen closed on 87. A makeable target Richie.

VD went out with the ‘Darkest of all things equine’ Hamilton in an experimental opening partnership. Hamilton (11) outshone and outbearded VD before he was bowled with the score on 27. This included a massive launch through cow, as the mathematical genius seemed somewhat perturbed by an alarming increase in the run rate equation. He thus decided to chance his arm/beard. ‘To hell with my bloody average’, he silently mused, stroking his 999 day growth.

Dark Horse’s drastic demise brought Sembian to the crease who hit 4 boundaries in his rapido 23. The game was up for Goettingen as VD was tipped over the bar with the ball going for 6. VD finished eventually on 44* with a couple more sixes launched for good measure at the visiting German female exchange jailbait students keenly watching events from the boundary. Teddy Dean 8* applied the last rites. In a split vote no fine was imposed for his ugly winning shot, not to mention his farcical attempt at a reverse sweep early doors. It hit him on the head, but we’ll let that slide for now.

Next up were the hosts from Brunswick Village. The selectors decided to controversially adopt ‘the never change a winning side’ policy. Phil Pudds had got lost on his way from work on the South Coast, which made the decision slightly easier.

Dakers farmed his way bravely to 41 for the hosts as they totted up 85 off their allocation. Sembi with 2-7 was the pick of the 8 MCC tweakers with a 3 over per bowler restriction. 3 stumpings for Harry too as the batsmen kept on walking not bothering to get back.

VD was demoted down the order as a direct result of his subdued scoring rate from the opening 20/20 game. Hebel was asked to replace him and he took up the challenge well with 43 before leaving the scene LBW. Doug Gilo meanwhile played the new bearded anchor role with 29* as MCC coasted to their target with 6 overs to spare.

Lovell was later presented with MCC’s 4th trophy of the year. He made a suitably gracious and eloquent speech for the benefit of the massive crowd in front of the players balcony at East Brighton Park. He especially thanked the BVCC organisers for all their hard work – especially skipper Alan and Liam the fixture sec.

There then followed a lengthy convoy back to the hotel as Brighton Gay Pride Week began to take shape. Loud and proud. Food of choice for the evening was a curry washed down with bottles of Nelson/Beater http://www.bottledbeer.co.uk/beer.asp?beerid=297

Or King Cobra even. Plenty more at the Pumphouse with live buskers then back to the hotel bar to join in the festivities with the obligatory Hen Party from Bromley. But that’s another story. Another time.

A late start for this one as several cars got lost en route to the Uni including one very knowledgeable female taxi driver. Lovell won the toss and decided to bat in tropical conditions.

A left/right hand combo of Hebel and Puddicombe got MCC off to a bright start despite some good left-arm bowling at one end. Pudds fell to an extremely good catch at mid-on for 10. Hebel and Khanna then took advantage of the wilting attack and proceeded to flail the bowling to all pastures of the Sussex Downs. Hebel eventually fell bowled for 90 as dehydration neared. Khanna was going well too as the declaration was made to put an end to the fielding side’s heat torture. Harry ended up with his highest score for the club on an unbeaten 70. MCC 213-3 off 34 overs.

Great tea again but did one detect somewhat of a struggle to go back out again at the end of a long hot tour to field? Hebel bowled with venom with the new ball on a bouncy university wicket. Ed, Harry and Pudds all had a spell behind the timbers as bowlers were seemingly a bit thin on the ground. Pick off the back up bowlers was eventually Dark Horse Hamilton with 2-34 off 7 overs. Left arm grenader Pudds took 2 wickets in his only over aided by a couple of Harry’s many stumpings for the tour. The home side did threaten at one stage before Hammo exposed their limitations and slowed the scoring rate. BVCC finishing 27 runs shy of the target after 40 overs.

A few beers at the home side’s pub the Connaught later followed by another Ruby Murray in Hove. But then the hotel bar called for others too tired to walk to Hove.

The next day – brekkie, swimming, crazy golf and the obligatory fish & chips as the tour ended in record UK temps in and around the South Coast.

Bizarrely no one (even Antipodeans) was heard to be complaining about the good ole British Weather (for a change). 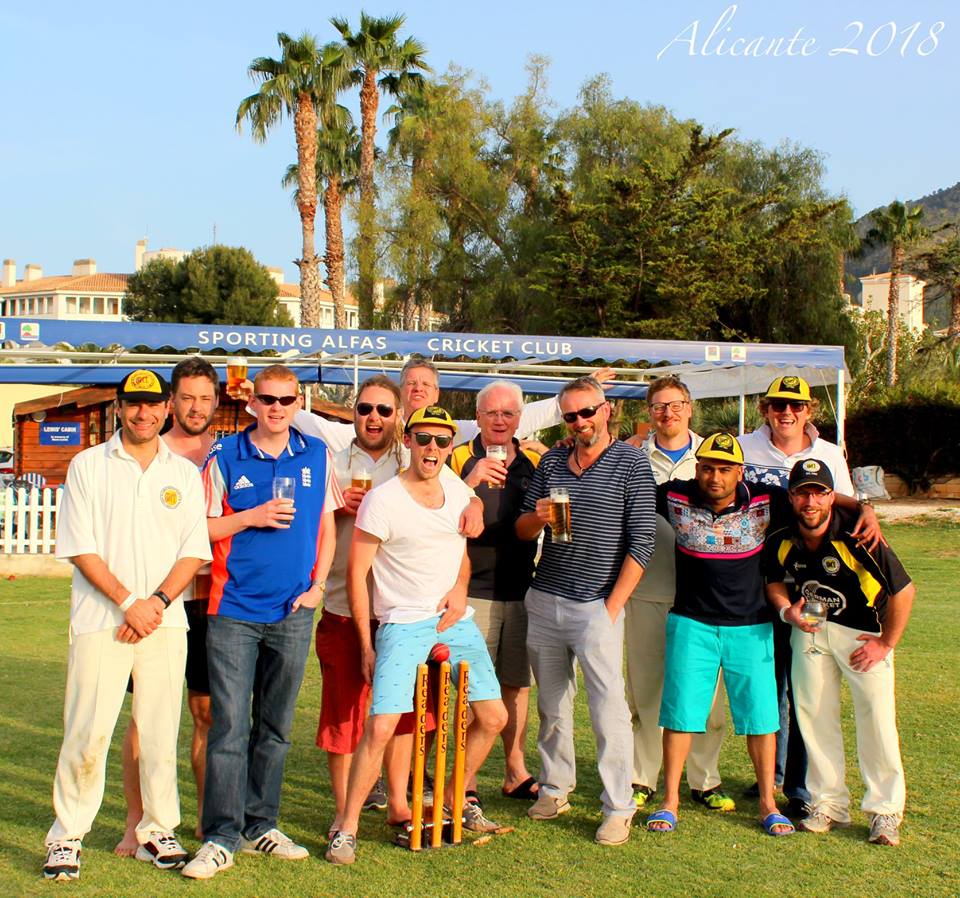