National pride stands tall today as one by one, English teams gained victories over national rivals. It started with the Heineken Shield where Harlequins beat the French in a nail bitter. The England Cricket team followed it up by a 3 day mauling of the Pakistanis and to cap a great day, the English strode to a ‘comfortable’ win over the Aussies in the Munich Ashes.

The English success was based on intense tiddlywinks practice and the bizarre choice of 5 “smurfs” in the starting line up, but was delivered through a determined batting performance and a consistent bowling attack where none of the bowlers conceded 20 runs.

Winning the toss, Mark ‘Jardine’ Lovell, the English captain, threw the game plan in the bin (did he ever have one?) and decided to bat in damp conditions. The Aussies struck early by running out Steve ‘Chalky White’ Power. Power had been scoring at a run a ball but slipped in the wet conditions, Richard ‘Tresco’ Mundy followed soon after, with the shock of running out his opening partner nothing compared to his disbelief at getting caught behind after the ball bounced around ‘pin-ball’ fashion in the slips.

At 20-2, the Aussies were in full voice looking to press home their advantage. Up came the skipper and vice captain, Nigel ‘knotty’ Shaw, and rebuilt the English innings with a combination of determined defence and cavalier attack. Nigel finally attacking once too often to go after 25 quick runs.

The mid-session drinks break came with England at 63-4 after 20 overs and left the match finely balanced. Setting himself a total of 160, Mark continued to accumulate runs and was capably supported by a steady partnership with Sir Jack Hobbs (aka Peter Wood) who scored 20 and the flashing blade of Alex ‘Beefy’ Gale (23).

The English score reached 100, and then headed for 160 with each Aussie over effortlessly going for 8 to 10 runs. Mark reached a well-deserved 50 before deciding that he had run for long enough. Afterwards claiming that he had slipped, he inexplicably walked nonchalantly up the pitch after an Alex drive to long on, only to find the ball come over his head and be closely run out. The English square leg umpire (who wishes to remain amonymous for his own safety) was later quoted as saying that with 160 on the board, the close decision ensured that the Aussies would have no excuses for their ‘inevitable’ defeat.

With the target 160 safely reached the English innings wound down to finish at 163-9 with a flurry of stumpings by the sharp Aussie keeper, Rod ‘iron gloves’ Murray. Though mauled in the English 3rd 50, Aussie MCC players ended with respectable figures with Mike Smith (6 overs, 1 for 25), Jason (1 for 12 off 5 overs..the prized caught+bowled dismissal of captain of vice Nigel), Dave Carr (1 for 17), Matthew (0 for 8) and the Aussie skipper Tony Blades (taking 2 late wickets from blitzlike stumpings for 21 runs) all making an impact. The guest Aussie pro, Kevin, also taking 2 wickets for 22 with his left-arm dibblydobblers.

Harmony returned to the ground as the largest ever crowd for a Munich cricket match enjoyed the sun and tucked into the impressive lunch.

The Aussie innings started well with the first 7 overs seeing them to a comfortable 30-0. Then Mark turned to his second string bowlers, with the bowling changes bringing immediate results as the Aussie top order crumbled under intense English pressure. Steve and Alex returned 2 wickets each and Peter maintained the pressure as the Aussies suddenly couldn’t score a run -being reduced to 43-4 off 16 overs.

At this point the game reached its crucial watershed. The Aussie semi pro came in and straight away Mark turned to his most experienced and wily bowler. Experience won out immediately, with Kevin going for only a single run and Mike ‘Brian Close’ Stringfellow beginning the spell that would bring amazing figures of 4 wickets for 17 runs.

In came Tony with his team in tatters at 47-5 – a captains innings was needed and Tony set himself to bat through to the end eventually making 26 not out.

At the other end, Dave Carr who had started brightly picked up the challenge with Tony. In their best spell of the match, Dave and Tony added 56 runs over the next 18 overs to bring the Aussies over 100 and towards a respectable score.

With the required rate per over reaching 15, Dave finally fell in the 36th over after opening the Aussie innings and scoring 58. The remaining Aussie wickets tumbled quickly with Aussie finishing all out for 107 – some 56 runs behind the jubilant English.

The English bowling had won through with Mike being capably supported by Steve (3 wickets for 13), Alex (2 for 15) and most surprisingly the claimed to be non-bowler Richard scooping 1 for 16. Disappointed not to take wickets in his opening spell, Ian ‘Tuffers’ Finch excelled in the field taking a nonchalant one handed catch and running tirelessly to restrict the Aussie scoring.

In the end, everything turned out as it should. England beat the Aussies to take the replica urn, the Aussies managed to claim some victory by asserting that they are always ‘winners’ anyway, the large crowd of 100 enjoyed the sun and the strange but quaint spectacle of cricket in Munich, and the match Sponsors – Outland, the Munich Aussie Bar, supplied the liquid celebration. Magnanimous in Victory, Mark raised the possibility of Aussie revenge by suggesting to popular approval that the Munich Ashes should be held more regularly – so bring on the 3 test series! 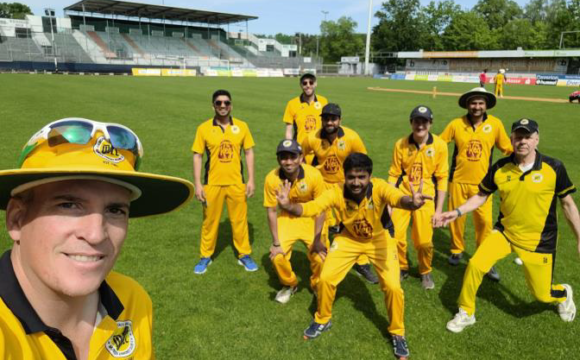